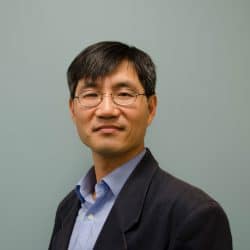 Dr. Jong-Min Lee earned a B.S. and a M.S. degree from Seoul National University, and a Ph.D. degree from University of Wisconsin. After completing postdoctoral training and instructor at the MGH / HMS, Dr. Lee was appointed as an Assistant Professor of Neurology in 2013. Dr. Lee’s lab studies Huntington’s disease (HD), focusing on developing efficient treatments for HD based on observations in humans through personalized gene silencing strategies.