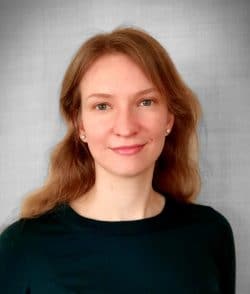 Dr. Kaitlin Samocha is an Assistant Professor at Massachusetts General Hospital, where she established her lab in 2021 as part of the Center for Genomic Medicine. She is on the steering committee for the Genome Aggregation Database (gnomAD), one of the world’s largest publicly available collections of human genetic variation data, and is part of the Translational Genomics Group at the Broad Institute.

The focus of her research career has been on developing methods and statistical tools to improve interpretation of genetic variation, particularly rare variation. She created a mutational model to predict the expected number of newly arising (de novo) variants that has been leveraged to associate dozens of genes with autism spectrum disorders, congenital heart disease, and schizophrenia, among others. As a way to aid variant interpretation, Kaitlin developed metrics to measure a gene’s tolerance to mutational changes, including the pLI score that was used to identify thousands of genes intolerant to loss of a single functional copy. Additionally, she led an international consortium studying developmental disorders and identified ~300 significantly associated genes, including 28 that had not been robustly tied to these disorders.