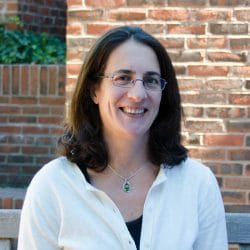 Dr. Wheeler received her Ph.D. in Molecular Genetics from the Imperial College of Science, Technology and Medicine in London and carried out postdoctoral training at Massachusetts General Hospital. Her research focuses on Huntington’s disease (HD) and other disorders caused by expanded repeats. She receives NIH and foundation support and maintains an active teaching role. She is the recipient of a Claflin Distinguished Scholar Award and HMS Excellence in Teaching Awards.