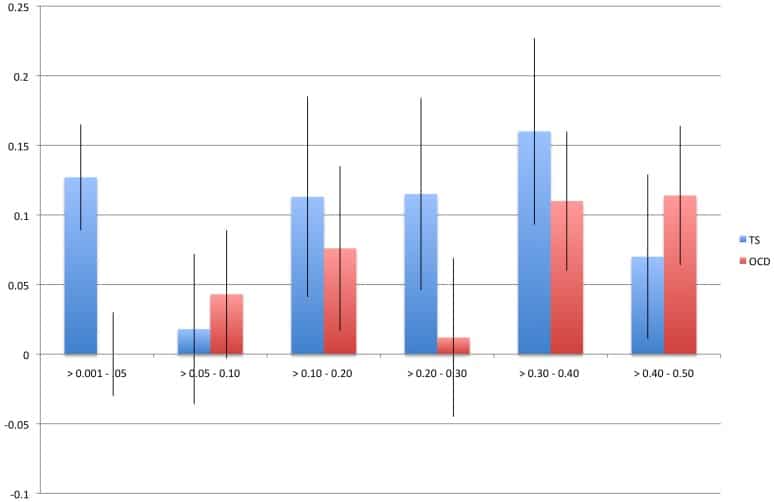 
The direct estimation of heritability from genome-wide common variant data as implemented in the program Genome-wide Complex Trait Analysis (GCTA) has provided a means to quantify heritability attributable to all interrogated variants. We have quantified the variance in liability to disease explained by all SNPs for two phenotypically-related neurobehavioral disorders, obsessive-compulsive disorder (OCD) and Tourette Syndrome (TS), using GCTA. Our analysis yielded a heritability point estimate of 0.58 (se = 0.09, p = 5.64e-12) for TS, and 0.37 (se = 0.07, p = 1.5e-07) for OCD. In addition, we conducted multiple genomic partitioning analyses to identify genomic elements that concentrate this heritability. We examined genomic architectures of TS and OCD by chromosome, MAF bin, and functional annotations. In addition, we assessed heritability for early onset and adult onset OCD. Among other notable results, we found that SNPs with a minor allele frequency of less than 5% accounted for 21% of the TS heritability and 0% of the OCD heritability. Additionally, we identified a significant contribution to TS and OCD heritability by variants significantly associated with gene expression in two regions of the brain (parietal cortex and cerebellum) for which we had available expression quantitative trait loci (eQTLs). Finally we analyzed the genetic correlation between TS and OCD, revealing a genetic correlation of 0.41 (se = 0.15, p = 0.002). These results are very close to previous heritability estimates for TS and OCD based on twin and family studies, suggesting that very little, if any, heritability is truly missing (i.e., unassayed) from TS and OCD GWAS studies of common variation. The results also indicate that there is some genetic overlap between these two phenotypically-related neuropsychiatric disorders, but suggest that the two disorders have distinct genetic architectures.