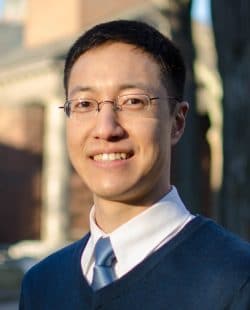 David grew up in Taiwan and moved to Vancouver, Canada at the age of 11.  He obtained his B.Sc. in Honours Physiology from the University of British Columbia in Vancouver, Canada, and his MD and PhD from Baylor College of Medicine in Houston, Texas, with a thesis focused on the molecular mechanisms of atrial fibrillation, under the mentorship of Xander Wehrens, MD, PhD.  Upon graduation David undertook a research fellowship in the lab of Albert Heck, PhD in Utrecht University, The Netherlands as a Basic Research Fellow of the European Society of Cardiology.  He then moved to Boston, MA for his internship and residency training in internal Medicine at Brigham and Women’s Hospital.  After graduating from the program, he joined the lab of Calum MacRae, MD, PhD in the Cardiovascular Division at Brigham and Women’s Hospital as a research fellow.  David’s research projects focus on elucidating the genetic and molecular mechanisms underlying cardiac arrhythmias with the goal of developing novel disease-modifying therapeutics.

Through participating in the Leducq network, “The sodium channel as a therapeutic target for prevention of lethal cardiac arrhythmias,” I have become interested in understanding the genetic and molecular bases of Brugada syndrome (BrS), which is a devastating disease with genetic heterogeneity and no disease-modifying therapeutics.  Through collaboration within the network, a large genome-wide association study (GWAS) was recently completed in BrS patients, which identifies a number of candidate genes.  Among these we have chosen the most promising genes to investigate experimentally, by making loss-of-function mutations in zebrafish.  Using these mutants we plan to 1) characterize the effect of the mutations on cardiac physiology and electrophysiology in the context of BrS pathogenesis, 2) dissect potential genetic and/or molecular interactions with other candidate genes from this and other relevant/related GWAS studies, and 3) conduct high-throughput drug screens and explore potential therapeutic targets.  Although BrS is rare, understanding of its genetic heterogeneity and molecular determinants may give new insights to more common cardiac arrhythmias and help uncover novel and personalizable drug targets.